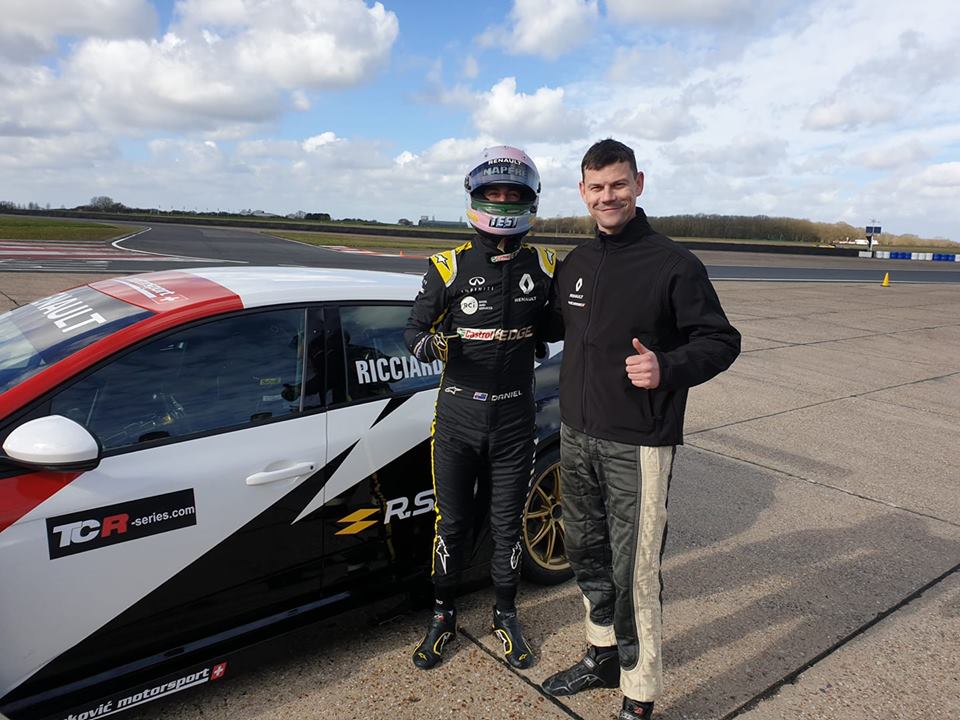 The pre-season time has been very busy for Tomáš Pekař. In February, he got his first taste of a Renault Mégane TCR car at Valencia. In March, he did another testing in Bedford, Great Britain, where he also met with a Renault F1 Team driver Daniel Ricciardo.

You have already tested Renault Mégane in Valencia, Spain. How do you like it so far?

In comparison to the Cup cars, in which I’m very experienced, the Mégane is much more powerful and has much more grip, thanks to bigger tyres and a better chassis. Mégane is a pure racing car with special components, so it’s another level in comparison to the Cup cars, which are based on serial production cars. This Mégane is nice to drive, but it’s also busier behind the wheel. You need to find the perfect set up for each circuit and also the best compromise between an aggressive and precise drive. There is much bigger stress on the components and they wear much more quickly than what
I‘m used to.

But if you look at the WTCR races, drivers do not hold back and push their cars to the limit.

Yeah, it’s impossible to drive too careful. If you want to succeed amongst so many other manufacturers, you cannot be afraid. There is a lot of work to be done on the car, lots of testing of different components like brakes, and you must find the supplier whose brakes will survive.

In Valencia, you also got a chance to see how the Balance of Performance process works at TCR. What can you tell us about it?

There’s always one driver doing the BOP, driving with every car. I think that he tested like 5 cars in Valencia. He has three fresh sets of tyres for each car. He goes on the track, heats up the car, gets new tyres and then he sets the lap time. And based on these lap times, they change the engine mapping, car’s weight, etc. That’s how they work with the cars. They either make them faster or slower, in order to run as close to each other as possible.

It was a promo event for Renault, Castrol and their customers. However, I got to drive the car there, did some work on the chassis and tested some setup changes to find out, how the car is going to react. Also, we worked with Daniel Ricciardo who drove the clients. He is really a happy guy and it was a pleasure to work with him. He did not have any previous experience with a touring car, so I was showing him what to do. We also worked on a setup with him a bit and he provided some feedback.

So, can we say that you gave some advice to a Formula 1 racing driver?

Yeah, I was describing him how the buttons work, things about gearbox and stuff, so he knows how the car works. And he got into it pretty quickly. Well, to be honest, he has much more buttons on his steering wheel in F1.

What is on your schedule in the near future?

Tomorrow I’m flying to Barcelona to work on the LMP3 prototype. Then, I have testing with Renault Mégane at Slovakia Ring, before a testing event with Renault Clio customers in Belgium. After that, I have a 12-hour race with BMW GT4 at Mugello and then on 1st April, I go to Oschersleben for an official test session for the Clio Cup series. So I’m going to be really busy.