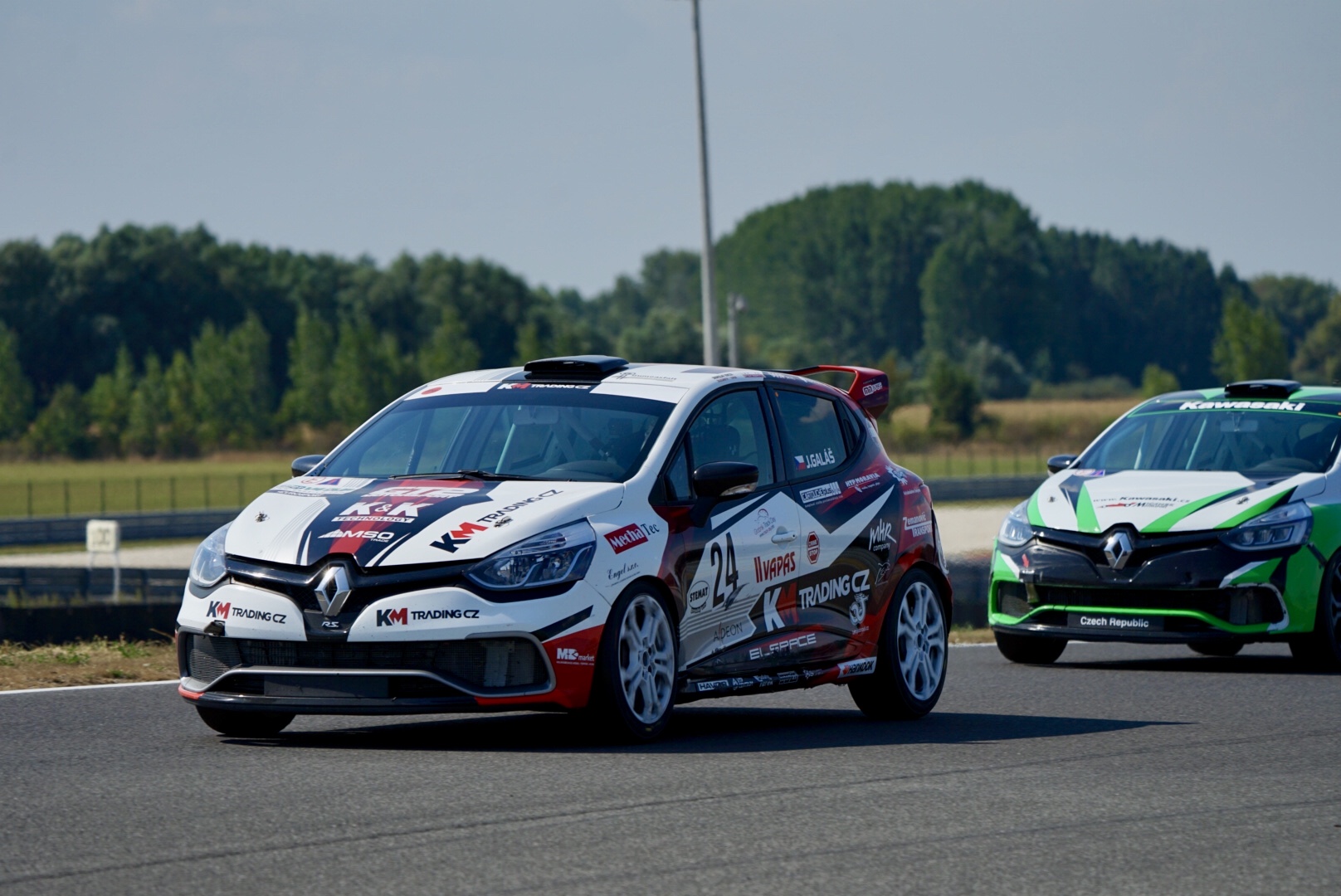 Nice duel, trip off track and another victory for Galáš

The Sunday Clio Cup race was controlled by the pair Jáchym Galáš and Petr Majer. The two pilots played the cat-and-mouse game for the whole 10-lap sprint race, assuring a marvellous spectacle for the viewers nearly for the whole race.

The passing start was best for Petr Majer, who overtook Jáchym Galáš starting from the pole position in the sprint before the first curve and took the lead. However, the winner of yesterday´s race Jáchym Galáš was not prepared to give up and successfully attacked Majer in the second lap, thus showing how fitting the quick and technical Slovakia Ring was for him.

The same could be said about Majer, too, who was driving stuck to Galáš´s rear bumper preparing for another attack. Their rivalry was interrupted for a while by the safety car joining the starting field dues to an accident of Mazda vehicles of the Slovak championship, but as soon as the green lights over the starting straight were illuminated their overtaking spectacle could continued.

Galáš and Majer staged a fantastic show taking form of frequent rank swaps and seemed to be prepared to continue this to the finish. However, at the end of the race the leading Majer braked incorrectly in a curve and left the track behind the third horizon, which enable peaceful way of Galáš to the finish and a double at Slovakia Ring.

“The victory is sweet and I am glad I could enjoy it on both Saturday and Sunday. Slovakia Ring fits me excellently, though I did not even dare to think of a double victory here before the weekend started,“ rejoiced Galáš.

The second rank belonged to Michal Makeš, following the duel of Galáš and Majer from a distance. “I opted for the strategy of a safe ride and did not want to risk in Slovakia. My main aim was not to lose my score. Two second ranks are not bad. A decent advantage for me before the Brno finals,” said Makeš.

The third rank was occupied by Zoran Poglajen, who opposed Majer in the course of the last two laps. The Slovak pilot finally defended the bronze rank. Petr Majer therefore ranked fourth and the top five were completed by the Italian pilot Mattias Lodi.

The Clio Cup III category was won by Sebastian Kolakowski and the triumph in D4-1600 was on the side of Dušan Kouřil.

“The circuit is good and quick. On the other hand, this is a disadvantage for my weaker car. However, I am glad to have been able to compare to the older Clio of Sebastian Kolakowsky and to have ended before him. I addition I had to fight off some viral disease today,” was Dušan Kouřil´s comment on the race.