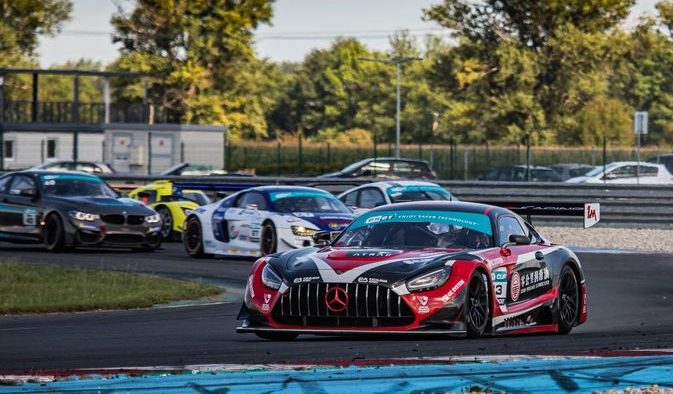 The championship battle, a return of good old drivers and stars from the world of truck racing. All that and even more is planned for the upcoming GT sprint races at Hungaroring.

This year’s championship ends at Hungaroring this weekend and of course, fans can also look forward to the GT cars. And the entry list of sprint races is promising some exciting battles.

In the GT3 category, it is going to be a tight championship battle between Gregor Zsigo, Daniel Skalický and Petr Kačírek. Zsigo is currently leading the points standings, after finishing on the podium in all races so far this season and winning the first race at Brno. The Trevor Racing driver has 29 points, while Skalický in 2nd place has 25.5 points. Skalický’s teammate at Duck Racing – Petr Kačírek – holds 3rd position in the standings with 21.5 points.

While Zsigo is set to race in both Sprint races this weekend, the Duck Racing team has decided to give a chance to both drivers, with each taking part in one of two races. However, as only the best result of the weekend counts towards the championship, the drivers will not face any disadvantage.

However, many others who want to battle for the victory in Hungary as well. One of the returnees on the grid is going to be the Olimp Racing team. In their previous involvement in the series, they were amongst the best teams in the GT3 category. This Polish team is set to enter two Mercedes-AMG GT3 cars with Stanislaw Jedlinski and his son Marcin, a GT3 Sprint champion from 2018.

But there is going to be also one more Mercedes-AMG GT3 in the GT Sprint races as Buggyra Zero Mileage Racing is also coming back to race on a circuit that is famous for hosting the Hungarian Grand Prix in the Formula 1 World Championship. The Czech team had a very successful race at Slovakiaring earlier this season when David Vršecký dominated in both Sprint races.

This time, the team is putting two different drivers behind the wheel this weekend. One of them will be a 2017 FIA ETRC champion Adam Lacko, who is going to be joined by his current FIA ETRC teammate Aliyyah Koloc. She already took part in the opening round of the season at Grobnik, Croatia, where she raced with a Renault Clio. And while Lacko has already some experience with a GT car from the past, for the 16-year-old daughter of another former European Truck Racing champion Martin Koloc it is going to be her first GT experience.

The GT4 category is offering some thrilling battles as well. This year’s season has given fans a huge championship battle between Ferenc Ficza from the Trevor Racing team and Sergej Pavlovec, who is racing for the RTR Projects team. At the moment, Ficza leads the championship by 3.5 points ahead of Pavlovec. And only one is going to emerge as a championship winner after this weekend.

And the entry list also features a D5 prototype category with Miro Konopka in a Ligier JSP2 of ARC Bratislava team. The Slovak driver will face a BM Racing Team driver Jacek Zielonka, who is driving a Radical SR8 prototype.

Tags:
Previous Article
‘We believe in a good result‘ says Miniberger ahead of Hungaroring
Next Article
Who is going to take 2nd place in Renault Clio Cup?