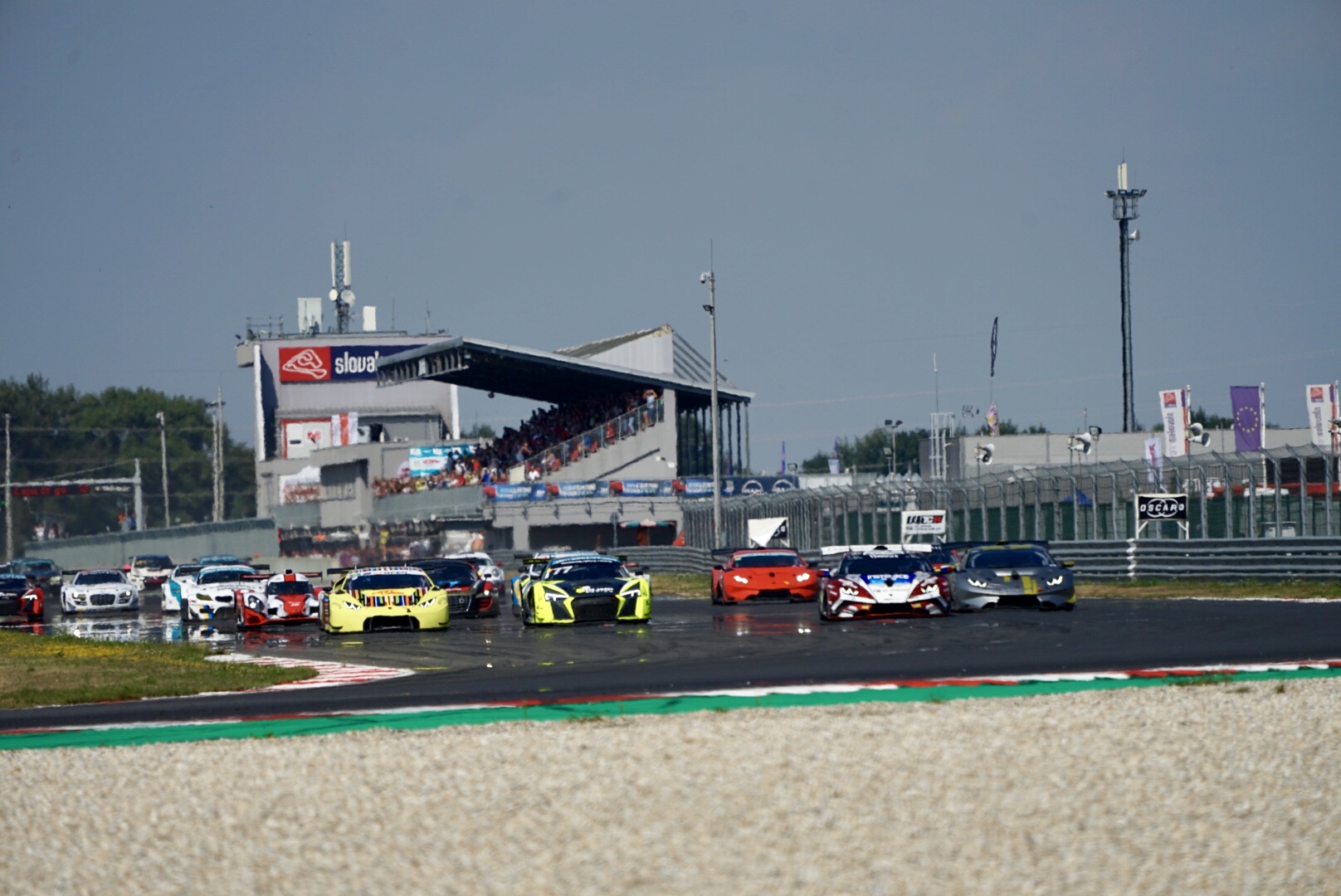 The afternoon ESET Sprint race was much more attractive than the Saturday sprint and the audience at Slovakia Ring mainly watched the leader Josef Záruba, holding a defensive trail before the Polish pilot Jedlinski.

Josef Záruba of Mičánek Motorsport team probably learned a lesson from the Saturday start of Filip Sládečka and advanced to the lead from the fourth position in the starting grid in the very first curve in front of Samuel Sládečka, Jirka Malchárek and Marcin Jedlinski.

The Polish interim ranking leader Jedlinski in sprint as well as endurance made it clear he would advance forward uncompromisingly and his attack at the leading rank would just be a question of time. First he managed Malchárek and in the third lap he overtook Sládečka. At that moment a battle for the lead started. Záruba in his cup Lamborghini Huracán intensely defended the top rank in front of the quicker Audi R8 LMS GT3. Jedlinski looked for a recipe for overtaking for a long time and the two of them even contacted each other lightly.

Jedlinski finally overtook Záruba in the course of the sixth lap and then only controlled the lead with a light foot on the accelerator approaching his seventh victory in the season. Josef Záruba ranked second with a six-second loss, at the same time winning the GTC category before Samuel Sládečka and Robert Zwinger.

Category GT3 reserved the top rank for Marcin Jedlinski, accompanied to the podium by Richard Chlad Jr. in Audi R8 LMS GT3 and the domestic pilot Miro Konopka in Lamborghini Huracan GT3. The originally second-ranking Jakub Knoll received a thirty-second penalty from the commissioners for overtaking under yellow flags.

GT3 Trophy race was marked by a race-wide duel between Lubomír Jakubík and Tomáš Erdélyi. The two of them strive for the overall lead in the interim raking. This time it was Jakubík he led his BMW Alpina B6 GT3 within a machine-accurate trail giving zero chance to his follower Erdélyi and his BMW Z4 GT3.

The second victory of the season in TCR category belonged to Václav Nimč Jr. His Audi RS3 performed a faultless ride and for the first time defeated the very quick Milovan Vesnic in his Seat Cupra in a direct duel. The Serbian pilot was driving right after Nimč Jr., but did not find a way to overtaking this time. The third rank was occupied by Jakub Wyszomirski.

The D5 category in ESET Sprint found its winner in Petr Lisa, for a second time, in his prototype Norma LMP3.